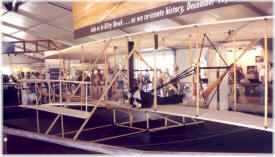 Thousands of aviation enthusiasts gather in Oshkosh, Wisconsin at the beginning of August of every year for the Experimental Aircraft Association’s (EAA) week long AirVenture. This year’s event featured exciting aerobatic teams, historic aircraft, exhibits featuring emerging technologies, and talks by famous aviators and aerospace pioneers. Two of the featured speakers were:  Chuck Yeager, who flew the rocket powered Bell X-1 past the sound barrier in 1947, and the Dick & Burt Rutan brothers whose aircraft Voyager flew around the world without refueling in 1986.

THE CARTERCOPTER, A REVOLUTIONARY GYROPLANE

The CarterCopter, a revolutionary gyroplane hybrid, was one company at the show that hopes to change rotor-bladed aviation. The CarterCopter’s unique rotor design, small wing, and custom pusher prop, will allow it to take off vertically and fly at approximately 500 mph at 45,000 feet, which is much faster and higher than a helicopter.  Jay Carter, the company’s president and chief engineer, plans to license technology and not get involved in manufacturing. 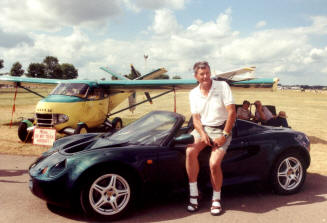 The dream of a practical air car lives on with Ed Sweeney, who plans to mate a Lotus Elise sports car with a wing and engine flight module. The concept allows owners to leave a leased flight module at an airport and drive away in the sports car portion. Flight modules for leasing would be available at various airports around the country.

Sweeney also owns the only flying Aerocar. Molt Taylor designed the Aerocar in the 1950’s. The Aerocar never made it into the large volume production he envisioned. Today only three other Aerocars can be found in museums. 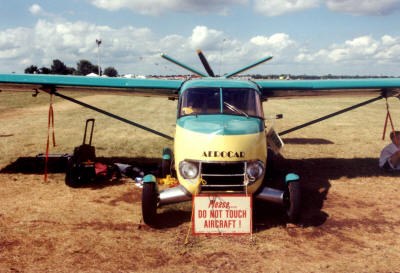 Aerospace engineer and author, Palmer Stiles, attended this year’s AirVenture.  His book “Roadable Aircraft, From Wheels to Wings” details the history and patents of many inventors who have attempted to successfully blend the car and airplane. Stiles said Paul Moller’s air car design, which has been on the covers of Popular Mechanics and Popular Science, might be first to succeed in becoming a practical air car.  He said “Moller is both a mechanical and financial genius. He has succeeded in creating a brilliant design and securing enough investment money for research and development.”  Moller, unlike most inventors, also plans to manufacture his air car.  “If Moller succeeds in bringing his design to the public through manufacturing, he will then have succeeded in making lasting contributions and improvements to aviation” Stiles shared. 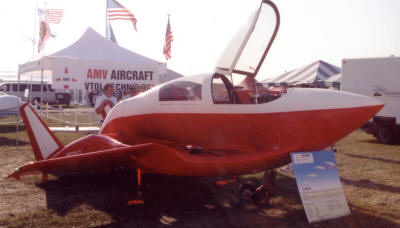 Two other aviation pioneers at the show were Attila Melkuti of AMV Aircraft and  Chuck Nearhoof of Affordable Turbine Power (ATP). Attila is working on a radical vertical takeoff and landing aircraft, while Chuck’s company has made turboprop engines more affordable.  ATP’s turboprop engines cost thousands of dollars, not millions of dollars. (Note: ATP’s new name is now Innodyn.) 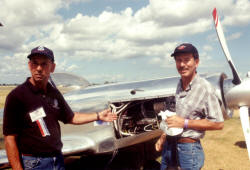 A TALE OF TWO OTHER BROTHERS, BURT & DICK RUTAN 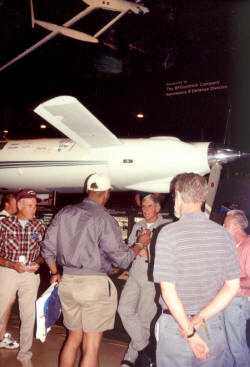 Dick Rutan is the test pilot of many of his brother Burt Rutan’s radically designed aircraft. Dick talked about Voyager at the EAA Museum during AirVenture. Voyager was flown around the world without refueling by Jeanna Yeager and Dick Rutan. This ambitious project took the brothers five years to get ready.  The tobacco industry would have financed the project, but the Rutans decided not to take tobacco money.  Dick and his wife spent eighteen months raising funds for the project. Many companies were afraid of the prospect of having their name and logo on a plane that might crash or cause an international incident. To keep costs down the Voyager team was made up of all volunteers.

The carbon fiber for the aircraft was donated. Dick commented, “If the aircraft had been constructed of aluminum, it would not have been able to hold or support its own weight.”  Carbon fiber and Nomex honeycomb were used instead. Carbon fiber is five times the strength of steel, but is half the weight.

To illustrate how critical weight was to their flight, Dick shared that the weight of Jeanna Yeager’s hair equaled a quarter mile change in the range of Voyager!  Even the liquid waste disposal post had to be retractable. The drag of this post would have shortened the range of the flight significantly. “The plane was difficult to turn,” said Dick.  Only one tail fin, the right one, of Voyager had a rudder.  This was another design feature to save weight. Due to this design, in a right bank the aircraft took 1500 feet of altitude loss before it could be rolled level again. A bank to the left did not present a problem. Burt Rutan had said of the right turn problem, “Its an around the world flight, it does not have to turn at all!”

The aircraft weighed 926 pounds and had 3.6 tons of fuel on board the day of its record-breaking flight. The 18 fuel tanks took all night to fill the night before the round the world flight. Each section had to be fueled carefully as not to bend the sections in a damaging way. In order to calm the fears of a recurring dream in which Voyager kept landing 100 miles short of its goal, Dick had 54 extra gallons of fuel added to the aircraft that night. He also brought along several 100-dollar bills and an American Express card in case they had to land in an unplanned location.  His nightmare scenario would have been “doing an emergency landing into Delhi, in a storm, while looking at the microfiche approach plate for directions.”

“When ATC (air traffic control) cleared Voyager from Edwards to Edwards (Edwards Air Force Base), it then sunk in what feat we were trying to perform,” Dick shared. The flight took off from Edwards and stayed on a westerly heading for the entire flight.  Voyager was flown at a relatively low altitude to take advantage of the trade winds that blow from the east to the west.

Over the South China Sea, Dick Rutan remembered flying an F-100 over Vietnam.  Vietnam did not allow an over flight by Voyager.  Dick said he was more scared in the Voyager due to bad weather issues that night, than he had been while flying over hostile northern Vietnam years earlier during the Vietnam War.

The weather was not the only factor that made the flight interesting.  The air traffic controller from Sri Lanka did not know what a “Voyager” was.  The controller also did not understand how an aircraft could be flying over the Indian Ocean with Edwards as its point of departure and destination.  After hearing a speech from the controller about how it was not good to make jokes on aircraft control frequencies, the Voyager mission control team made all air traffic control calls by telephone for the pilots.

HOW MUCH FUEL DO WE HAVE?

A Somali fighter plane tried to jump them over Somalia. Headwinds over South America decreased their overland speed significantly. “Fuel remaining” calculations became fuzzy at one point while still over the Atlantic.

The back engine, which was the only engine intended to run during the non-takeoff part of the flight, stopped (this engine had been hand started in California, as it did not have an electric starter).  They restarted the front engine and climbed, this helped the back engine “air start” as fuel began to gravity feed into the back engine. Dick had thought they were done for, and only several hundred miles from the end of the flight.

The left fuel tank developed a leak.  A right fuel tank fuel pump sheared. Fuel problems were countered by using plastic feed lines and safety wire to rearrange the fuel tank loads.  Using their quick fix the pilot pair managed to squeeze 28 gallons into the feeder tank.  This was how much they needed to make it home at this point of the flight.

HOME, NOT A MOMENT TOO SOON

Dick Rutan, exhausted and barely able to focus near the end of the flight, called Edwards Air Force Base requesting vectors to stay out of the way of any flight tests. The Air Force informed him that they had cancelled all flight test that day to welcome Voyager home. Thousands of people waiting to greet them were on one side of the dry lakebed near the desert landing strip. The flight took 9 days, 3 hours, and 43 seconds to complete, and fortunately not any longer.  A major oil seal on the back engine failed on landing, the only good place for a failure on this long flight!

I’m sure space & flight enthusiasts eagerly await more stories from the Rutan Brothers about their Spaceship One project (and stories from other pioneers), but I hope they are just a little less “eventful” than those of the Voyager experience!

THE RUTAN & WRIGHT STUFF, A COMPARISON

Not far from the Voyager display and replica at the EAA Museum is an aircraft replica of a different famous aviation first, involving two brothers as well. It is the 1903 Wright Flyer replica. When comparing the Wright Brothers’ famous first powered flight and the Rutan Brothers’ famous long flight, some interesting comparisons and contrasts can be made. 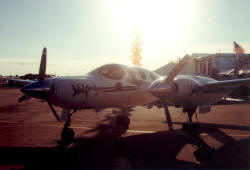 For more information on subjects in this article visit the following websites and examine some of the inventors’ patents and patent applications:

View some of the patents of the inventors mentioned above:

For more information on subjects in this article
visit the following websites: